(Note: I don’t really like releasing individual oatmeal recipes because of how redundant and easy they are, so I decided I just wanted to compile all my oatmeal knowledge into one post and call it a day. The only exceptions are my apple cinnamon porridge and my steel-cut apple risotto. If I ever make another exception in the future, it’d have to be absolutely amazing.)

I won’t lie, I used to be a health nut. So after reading that cereal is just empty calories and that I should be eating a healthier breakfast, I learnt about porridge, particularly the porridge known as oatmeal. Porridge basically refers to any kind of grainy starch (e.g. rice, quinoa, buckwheat, barley, etc) cooked in water or milk. At the time I didn’t know about the varieties of oats, all I knew was that I didn’t want those shitty microwavable Quaker packets that I always hated as a kid. So I instinctively bought a bag of small rolled porridge oats labeled “quick-oats” and a porridge mix which included whole flaxseeds, both of which were a bad idea. First of all, don’t get a porridge mix, get just the oats and mix them with your own stuff (you can’t even digest whole flaxseeds unless you grind them… what were they thinking when they made that mix?) Second of all, don’t get quick oats. More on that later.

I kept hearing about “steel-cuts”, and got pretty annoyed because I had no what they were. All I know was that I bought into the whole “porridge is the healthiest breakfast” nonsense, and wanted to be healthier. And now, I’m even more annoyed because literally every porridge recipe video you can find on Youtube (besides Jamie Oliver’s video) has some health-nut spaz doing an unnecessary 5-minute introduction talking about his/herself, and/or going on about how healthy oatmeal is as a breakfast following it up with a pretentious porridge recipe which includes little else than topping the completed porridge with slices of 18 different kinds of fruit, a pinch of ground nuts and finishing it off with a drizzle of honey every single time. It’s even worse trying to find interesting recipes that use steel-cut oats, because it seems like steel-cuts are “lower on the glycheminicxnin index” or something like that and are “therefore better for you” so the only people writing recipes for them are young women in exercise apparel who clearly have no real interest in cooking and scientists citing statistics on how those who consume steel-cut oats are something something healthier than you are. How boring…

I love to cook, and I’m more interested in taste than nutrition. I like porridge for its taste and the fact that it’s versatile, filling, and a great way to practice garnishing and presentation in the morning. The fact that it’s easy and healthy is absolutely irrelevant to me. And honestly, oatmeal is only “healthier” because people generally add fresh fruit and it doesn’t contain any added sugar. So while I disagree with the health nuts, I am however grateful that they got me started with cooking, I just wish they’d shut up about the health benefits already, all I want is an interesting way to cook my steel-cuts. Like Jamie Oliver, I want to cook porridge simply “because we love it”. So first off, let’s talk about oats…

The oat is a species of cereal grain which is grown for it’s seed which is what you buy in the grocery store and cook for breakfast (they’re also commonly used as feed for livestock, because they’re so healthy, and certainly not because they’re cheap and very sustainable to produce.) They can be bought in many different varieties, like rolled oats, steel-cut oats, large oats, etc. Just keep in mind that it’s the same god damn oat with the same god damn nutritional value. Steel-cuts have been processed the least, yes, but the other varieties have simply been processed (and the process is very natural) so that the average human being who doesn’t have 30 minutes to make breakfast in the morning can cook them quicker. So speaking of the varieties, let’s get into that, bearing in mind that it’s still the same oat.

Oat groats are oats in their purest, most unprocessed form. So pure in fact, that unless you grow oats yourself you probably won’t have access to these. Forget about trying to cook them.

Steel-cuts are the variety most popular in Ireland and most commonly advocated by scientists and gym rats. So that aside, this is the tastiest variety, in my opinion as someone who cooks as a hobby/ passion. I truly enjoy the taste and texture of these ones compared to the others, however, these ones also take the longest to cook. The cooking method is the same, it just takes longer. This is why most breakfast recipes you’ll find for these involve the use of a crockpot or a slowcooker, but that’s no fun…

Rolled-oats, sometimes referred to as porridge oats are the most common variety you’ll find in North America and the rest of the UK (excluding Ireland). Ideal for the morning person since they cook the quickest (minus the microwavable varieties which should just be avoided for a multitude of reasons) and they’re healthy enough to be advocated by literally every dummy who buys them. They taste good too, did you know? Of course you didn’t, nobody seems to care about the taste anymore. You’ll also find some sub-varieties of rolled oats like quick oats, which are just rolled-oats that are cut into smaller flakes, and instant oats which have been cut into even smaller flakes than quick oats. And when it comes to rolled-oats, the smaller they are, the faster they’ll cook. However, larger flakes do tend to taste better despite taking longer. It just goes to show you, the more time and effort you put into something, the tastier your porridge will be! Speaking of time and effort…

Cooking the oats, no matter their cut is the same deal: Bring oats in liquid to a boil with a pinch of salt, reduce heat to medium, cook until the liquid is no longer oozy/ watery. The liquid to oat ratio is different for each variety. I say liquid because some people use milk (this can include milk substitutes like almond milk) instead of water, or a combination of the two, but the ratio remains pretty constant no matter what you do. More information on liquids can be found under the notes at the bottom of this post.

You may see some people suggest 1/2 cups of oats to 1 cup of liquid, but if you’re going to bump up the portion size then you should also maintain the 1:3 ratio and use 1&1/2 cups of water. Just trust me, it makes the porridge less gluey and much creamier. At this point, you pretty much throw in anything you have. Fruits, honey, nuts, poppyseeds, jam, cocoa powder, chocolate, the possibilities are pretty much endless. So now, let’s put this into our classic recipe format:

This serves as the base for our porridge. Like most starches, this is what you’d call a “carrier of flavours.” Although toppings are where your own creativity is supposed to come into play, since this is a beginner’s guide I will be listing all the toppings I have used and liked. However, it’ll be up to you to come up with all the good combinations. (or you could cheat and look up more specific, non-generic porridge recipes. I do sometimes…)

And this barely even scratches the surface… the toppings are literally endless. Others do more savoury toppings like fried eggs, bacon, ham… be creative! And once you get bored of using oats for porridge you can look into oatmeal cookies, oatmeal pancakes (grinding up the oats and using them as a substitute for flour), homemade granola bars, muesli, etc.

Steps
1. Add oats with a pinch of salt to a saucepan. Pour on your liquid (water or milk, or a combination), turn the heat up to high, then when it starts to bubble turn the heat down to medium and cook stirring occasionally until the liquid disappears from the top.****
2. Take any desired toppings, prepare them however you want to and add them into the porridge however you want, then serve however you want.

Notes:
*Use steel-cuts or rolled oats, but not quick-oats or instant oats. The differences are explained above.
**I actually prefer to use water when it comes to oats; you don’t really need milk. They release their natural starches when cooked and it really thickens up the porridge to a nice creamy consistency, so I prefer to save my milk for more important things where milk actually does make a significant difference. Use milk if you want, but pay close attention to the pot and make sure it doesn’t boil over, otherwise you’ll have quite the mess to clean up. And say goodbye to that pot, too. (I’m talking from experience, take my word for it.)
***This is much more important than I let on. If you don’t add enough salt, your oats will taste like nothing. Do some experimenting and figure out how big of a pinch you need.
****Timings may vary, but it’s around 10-15 minutes for rolled oats and 20-30 minutes for steel-cut oats. Quick-oats would take about 3-5 minutes.

And that’s all there is to it. No, do not boil the water first before adding the oats; the oats release their starches resulting in a much creamier consistency if they’re brought up to temperature with the liquid instead of being dropped into boiling water.

Below you’ll find a handful of pictures I have taken of my oatmeals over the last year or so. Although oatmeal is a great way to practice presentation skills in the morning, I don’t usually bother making it look too nice, since it’s oatmeal, and nothing special.

One morning on which I really wanted porridge for breakfast but didn’t have any bananas, I had the crazy idea of throwing some of my dark chocolate into the saucepan. Needless to say, I was more than pleased with the results. (picture was taken on a day I actually had bananas) 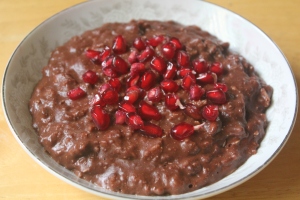 Melted dark chocolate, freshly made pomegranate juice and garnished with pomegranate seeds. Seasoned with a bit of cinnamon and allspice. 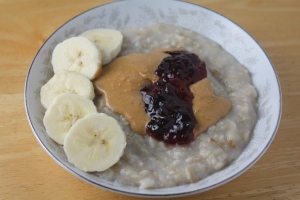 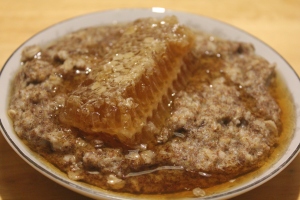 One day I was feeling ultra special and threw in a whole honeycomb. It was amazing.

My first time doing steel-cuts, and I did a simple topping of apricot jam.

Apple slices and cinnamon, finished off with a drizzle of honey. 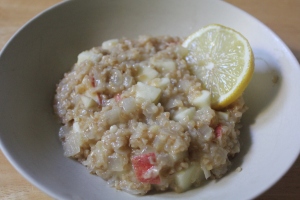 Steel-cut porridge oats with a diced apple and an onion cooked in the style of a risotto.

(Note to self: Did I just write 2200 words about oatmeal? This better help people…)